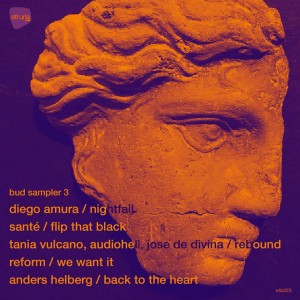 For its twenty third release Luca Agnelli´s Etruria Beat presents a new V/A, Bud Sampler 3. With tracks from the label finding strong support from the likes of Sven Väth, Truncate, Adam Beyer, Ryan Elliot, Luke Slater, Scuba and many more, Etruria Beat has also been receiving a number of tracks that were simply too good to let go. As such, we’ve grouped a new selection together for you.

First up we welcome the (almost) newcomer Diego Amura. After releasing a strong Ep for Arts he arrives at Etruria with his powerful track ‘Nightfail’, powered by a heavy, distorted kick and a dark vocal. ‘Flip That Back’ is delivered by Avotre’s mastermind Santé, showing his true underground persona with an obscure vocal that will blow your mind.

Tania Vulcano teams up with Audiohell and Jose De Divina to present, in true DC10’ style, ‘Rebound’, a track that is already set to feature on DJ Magazine’s Ibiza covermount Mix, before the mysterious new duo Reform drop ‘We Want It’, a no nonsense heads-down techno stomp of the finest order. Last but by no means least we have Anders Hellberg with ‘Back to Earth’, a track that shows the promising Berlin-based artist is one to watch out for.